The Most Surprising Birthday Present Ever

To increase engagement, Stelter recommended adding a full-page survey to the Symphony’s existing newsletter package. The newsletter was sent twice a year to about 9,640 donors and contained a brief article featuring the ongoing campaign.

Newsletter mailings were followed closely by an email highlighting the campaign and directing readers to a special page on the Symphony’s planned giving website. In addition, the Symphony sent a postcard during the final months of the campaign to remind donors of the concluding campaign efforts.

Results arrived early in the campaign. Responses to the first survey revealed the types of stories supporters were most interested in reading and provided insight on where they would like to see the Symphony in 20 years. Following the second newsletter, the Symphony had received more than 70 responses, 10 new gift notifications and many leads. With a month left in the campaign, the Symphony had already reached its goal of 70 new commitments. 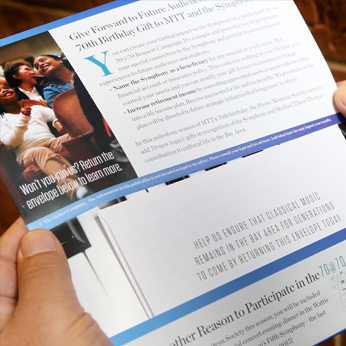 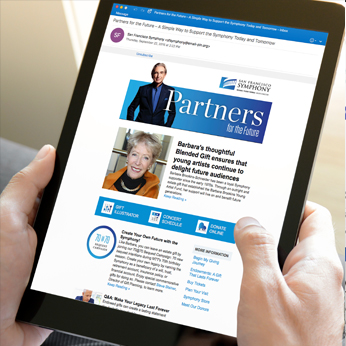 “Stelter worked with us on identifying and segmenting the correct target audiences for the campaign. In addition, they really helped add the polish and professionalism we needed to make the campaign a success beyond what we could have done in-house.”